You really feel like you’ve escaped the confines of the grockel shops and Mahabs’s Backpackistan when you head off in the maze of streets towards our guest house, on the northern edge of Fishermen’s Colony. People going about their everyday life, no hawkers, no beggars, rangoli patterns in front of most doorways. We’ll be sad to leave* this place.

Here’s a little video of us navigating the maze of streets, firstly to our guest house during the day and then from there to the Santana restaurant when it’s pretty darn dark.

*actually, we’ve already left, I scheduled this post for when we’re on our 750km train to Kanyakumari, 13 hours through the night to the southern most tip of India.

Breakfast is included in the Â£20 price of our room at Blue Moon and they’re pretty delicious and very filling, especially today’s where we had Egg Dosa and Idlis, all made by the owner’s sister in the rooftop kitchen.

Here’s a video of her making an Egg Dosa this morning:

My friend recommended Mamallapuram to me, we’re glad he did: Mahabs as it’s also known as is great. We’re staying in a pretty little guest house with its lovely owners who are so attentive and make staying here a great experience.
Mahabs has a lot of heritage from many centuries ago and today we went on a stroll – very slowly, blame the humidity – around much of it.
It reminds us so much of Hampi which we loved so much when we visited in 2011, but with a backdrop of tropical surf, what’s not to like.
Yesterday’s ocean view meal, at the Santana restaurant, with its backdrop of a tropical lightning was just stunning. Fish curry, calamari curry, butter chicken masala, all eaten during a power cut, with wind blown lanterns glowing gently. Wow.

Although we landed in Mumbai our trip really started when we landed at Chennai, after spending two nights in Mumbai just in case our luggage never arrived with us. The ‘short hop’ was a 100 minute flight, across a bit and down a bit, showing just how big India is.
Currently we’re in Mamallapuram, or Mahabalipuram as it used to be known, or Mahabs as it’s called for short, or, as I call it, Hampi-by-the-sea. 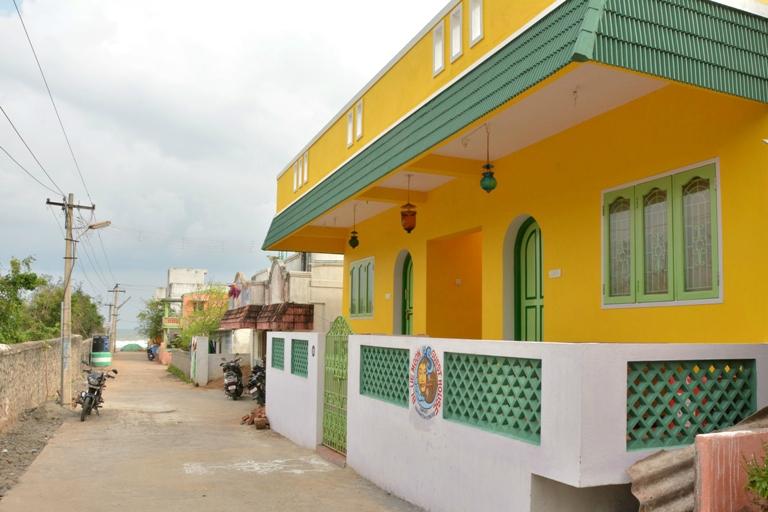 Rs1700 Â£20
In Mahabs our accommodation for 3 nights is at the Blue Moon Guest House, a relatively modern brightly coloured guest house on the edge of town, just a hundred metres from the beach – it’s at the end of the lane on the photo above – and easy walking distance to the Unesco World Heritage site. At the time we booked it it was ranked Number 1 of 29 B&Bs in Mahabalipuram, many people saying how the owner Saravanan made the stay even better.

Whoâ€™d have thought that weâ€™d visit Dunkirk in India. Confused? I mean the new box office movie which was sensational!

We visited the nearby Sun City cinema and booked our tickets two hours early for a princely sum of Rs450, which is around Â£6, yes thatâ€™s right, for all of us. We got three tickets for less than the price of one in England. After buying our bargain bucket of popcorn and drinks (Rs190, about Â£2.50), we settled into our comfy seats and awaited the adverts and trailers. The screen lit up. Yeah, itâ€™s starting!

Suddenly, the audience all stood up as the national anthem played, whilst a huge Indian flag fluttered on the screen. Slight awkward moment. Do we sit or stand? We decided to join in with everyone else. Perhaps this might catch on in UK? Or not!

Immediately afterwards, Dunkirk started and within seconds – there were no trailers – we were totally engrossed, especially me, who might have jumped a few times (not a great idea when holding popcorn!).

I was really enjoying the movie when abruptly (about half way through) the screen went black. Damn a powercut, Amy thought, but no, the lights came up and people went out for refreshments. We werenâ€™t expecting that!

It was great to experience the cinema in Mumbai, which is of course the centre of Bollywood. Weâ€™ll do this again but Bollywood style.

Well, we couldn’t call the blog Masala Dosa Diaries and not have one for our first meal, barely 7 hours after arriving.

Amy and I both had a masala dosa for breakfast, we liked them, which is good as I don’t fancy renaming the whole blog so early on.

The online check-in had already presented me with issues it shouldn’t have: it tried to force me to enter details of our German visa – we don’t need one – and I couldn’t get past that part of the process. Except, if you cancel the check-in process and start again it start’s from where you left off and forgets about the mistaken need for a German visa, until the next passenger and then you have to repeat the quit/start-again process.

I thought this would be the only visa problem, I was wrong.

At Heathrow check-in they thoroughly checked our visas for India, no problem, everything’s fine. We went through security with a bit of an issue, but after that it’s plain sailing we thought.

We had two hours in in Munich airport before our transfer to the Mumbai bound flight left, plenty of time as our baggage was handled automatically.

The Lufthansa announcer at the gate informed us we all needed our boarding passes stamped before we’d be allowed to travel. No problem, everything’s correct and in order, this will be easy.

“This is not a visa, this is only the application form.”
“It’s not, it’s what you get sent when the application is granted, that’s why it’s got the barcode and our attached passport photo. It’s a new visa style, for short term tourists, have you seen them before?”
“No, you must have a stamped visa in your passport, you cannot fly to Mumbai”.
Arrrrgggghhhhhhh.
We had to talk to another officer who suggested looking for emails on my phone, which wasn’t working, the airport WiFi was dead and although I knew I should be able to use data on my contract in the Euro it just wasn’t working. Turns out I hadn’t switched ‘data roaming’ on!

Eventually I got emails stating the visas had been granted.

And this was enough to get us through.

So, the key lesson is: if you’re travelling on a new style visa it’s probably likely airport staff in places won’t know about it so take every last little bit of information you have. An untrained, or rather unaware, member of transit airport staff almost stopped us getting to India, she had the final say and we in the end were lucky.

Arriving in Heathrow, checking in to our Mumbai via Munich flight was a breeze, it hardly could have been easier, except for the slight confusion between my “don’t let the x-ray staff bamboozle you with tales that the bodyscanner will be okay with the insulin pump, it’s not” and the “he said it would be fine”.

Security checks often feature high in the list of people with diabetes who are infrequent flyers. It was for us too as we have only flown once post Amy’s Type 1 Diabetes diagnosis. Back then all we had to worry about was taking insulin and other medical kit through. Now though we had the added issue of Amy’s insulin pump which she wears 24/7 and the two backup insulin pumps we were carrying, just in case.

The rules on insulin pumps and x-rays are pretty clear for most:
– they’re okay through the walkthrough scanner although it’s easier to disconnect them briefly and pass to a security officer
– the pumps must not go through the conveyor belt x-ray machines
– the pumps must not be subjected to the newer full body scanners.
However some frequent flyers say this is all rubbish, and I’ve read things from others who state that you’ll be subjected to more x-rays on the plane than any machine would. I have no idea what’s right so I have to believe the insulin pump companies.

On top of what the pump companies say, Amy’s insulin pump is out of warranty, if it breaks she’ll not get another one until we sign up to another four year contract.

Jane and Amy went through first, mentioning the diabetes kit and insulin pumps to the officer who was well used to dealing with medical issues. I went through and was told to move on and told not to hang around Jane/Amy who were held up with checks. “Whatever you do, don’t let him tell you it’s okay for the pump to go through the full-body scanner” I whispered as I walked off.

A few minutes later I saw Amy in the full body scanner.

The security had bamboozled Jane in the confusion of the situation, easily understandable for us infrequent flyers who are like fishes out of water in situations like that.

My heart sank. Oh crap, that’s one pump down, two backups and two flights to go, I thought.

Well, I hope I’m not going to regret this in the coming days but the pump is still working 24 hours later 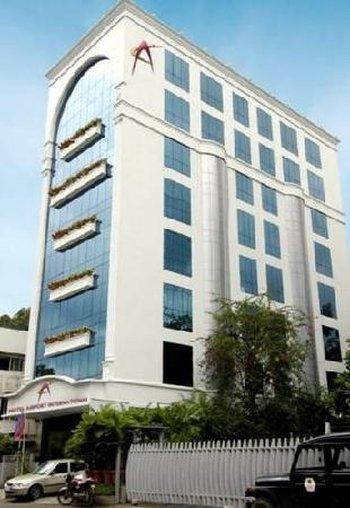 Rs4200 Â£50
In Mumbai our accommodation for two nights is the Hotel Airport International, a fairly standard budget hotel very close to Mumbai’s domestic airport, not too far from the international airport. We stayed here at the end of our 2011 trip, arriving late by a 13 hour train from Goa and departing early for a flight home. We never really saw much of the hotel but it did us very well and I had no hesitation to stay here again.